TrainAsONE / Couch to 5K – We Need You 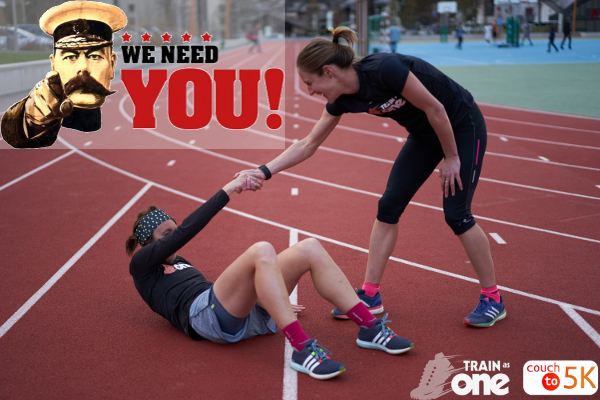 Are you thinking or have decided to follow a Couch to 5K (C25K) programme? Want to help with research? We are looking for volunteers to take part in a small piece of initial research before we embark on a large scale study.

Couch to 5k was developed by Josh Clark (a User Experience designer) in 1996 as a program to guide people on beginning to run: “to bridge the gap from walking to jogging and eventually to running”. He felt that too many people abandoned running shortly after starting out due to attempting (because of a lack of knowledge) to perform too much, too quickly – they experience “burning lungs” and “muscle aches”, and abandon running due to thoughts of “this feels bad” and “I’m not able to do this”.

The basic idea of the plan was to have a 3 day per week schedule beginning with run-walk routines of 20 minutes, progressing over 2 months to a goal of running a continuous 5 Km (or 30 mins). Clark tested his first incarnation of the plan on his mother, and then released it to the public on his Kick website. Later Kick was subsumed into coolrunning.com, still the ‘official’ home of couch to 5K. There are numerous official (and nonofficial) minor alterations or adaptations over the years, but the basic plan remains the same.

It is estimated that over 5 million people have used the official C25K mobile app. Despite the popularity of C25K, there is very little in the way of published research into the effectiveness of it and similar programmes. With the limited research to date based on small numbers it is hard to draw any conclusions, although there is evidence to suggest an increase in Running Related Injuries over other approaches.

Team TrainAsONE has always wanted to investigate this area as we believe, using our advanced fitness analysis experience and artificial intelligence systems that are already training thousands of people to achieve amazing results, that we will be a able to make a difference. This is where we need your help (or that of your friends or relatives) for an initial pilot investigation and analysis before a larger scale study that we are in the process of planning.

What do I need to do?

The minimum we need is for you to follow a C25K plan of your chosing, recording your run/walk data for us to analyse. We recommend the UK’s National Health Service free LiveWell C25K plan. This is available as either a downloaded set of podcasts or a smart phone application on both Android and iPhone. To record your data you need to either use a compatible GPS sports watch or running app on your phone.

Remember, the TrainAsONE team will be at hand to help with any issues you may have at any time.

To record your run/walks you will need a tracking device or smart phone app. Your activity data can then be loaded into TrainAsONE in a number of ways:

If you are not currently using an app we would recommend creating a free RunKeeper account. RunKeeper can collect activity data from: Fitbit, Garmin, Microsoft Band, iSmoothRun, TomTom, Withings, and many others.

Strava can collect activity data from: Fitbit, Garmin, Polar, Suunto, and many others.

Third party service such as Tapiriik, FitnessSyncer, or CopyMySports can connect a variety of other systems to RunKeeper or Strava and then connect this to TrainAsONE. They have an additional advantage that they can copy all historic data.

If you have any questions or issues, please let us know.